Next Class Begins in December 2021.
Class 60 is in process. Applications received after the start of Class 60 will be held for Class 61 review. Responses will be mailed out right before the class begins. 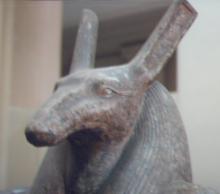 (Sutekh; G/R Seth) - (unknown, derived possibly either from the word "to dazzle" (setken) or "stabilizing staff/pillar" (setes)) In the oldest mythologies, Set is "He Before Whom the Sky Shakes," a sky-Netjer like Heru, and specifically of the storm, with lightning and thunder His heralds. Eventually, because of His natural opposition to His brother/nephew Heru, and also because during the Second Intermediate Period, invading Hyksos forces identified their own chief god with Him, Set's reputation changed. Into the New Kingdom with the rise of the cult of Wesir, which posited Set (as lord of the desert which crept into the arable land at the end of every year) as the "murderer" of the Lord of the Black Land, Set was literally demonized, and in late periods was identified with Apep as a symbol of complete destruction and with later religions' concepts of "the Devil," including both Greek Typhon and Hebraic "Satan."

It is important to note that both are non-Kemetic understandings - Set at all times, while not exactly a "nice guy," is a necessary force in the universe - that of strength and violent force - and in Kemetic myth, even Ra acknowledges this, by awarding the post of guardian of the Boat of Millions of Years to Set after the kingship is given to Heru, because Set "is the only one strong enough to do it." Set is symbolized by the ass and the hippopotamus and the pig, and sometimes the jackal (and at least theoretically the hyena); however, His main theophany is an unknown canid with square ears and a forked tail, often called simply the "Set-animal," whose species has been a mystery to Egyptologists. In late 1996, a large mammal with square ears and a forked tail allegedly was caught and killed in Upper Egypt. Called "salawa" by the locals, the animal has been theorized to be part of the family from which the South African Cape Hunting Dog comes; its extreme size and appearance lend credence to the folktales surrounding this newly-discovered desert mammal as "Set."